NOUN
1. A system of religious veneration and devotion directed towards a particular figure or object.

1.1 A relatively small group of people having religious beliefs or practices regarded by others as strange or as imposing excessive control over members.

Origin
Early 17th century (originally denoting homage paid to a divinity): from French culte or Latin cultus ‘worship’, from cult- ‘inhabited, cultivated, worshipped’, from the verb colere.
—-
This is another word that has been blurred in usage. When someone says ‘cult’, most think of fringe groups. Yet that is the second meaning, not the first.

Language is …. fascinating. And words …. are powerful.

Adam in Hebrew means ‘man’ or the root word ‘red’.

It continues with … “And let them have dominion over the fish of the sea and over the birds of the heavens and over the livestock and over all the earth and over every creeping thing that creeps on the earth.”

Dominion. Like any language, words shift meanings. We think of dominion as ‘master’. Consider it as STEWARDSHIP.

To take care of, to nurture, to be care takers of GOD’s GIFT!

John 4:24: “God is spirit, and those who worship him must worship in spirit and truth.”

Genesis 1:27: So God created man in his own image,in the image of God he created him; male and female he created them.

God created ADAM (meaning ‘man’) in both male and female versions. Both.

God created ‘man’ IN HIS LIKENESS.
God is Spirit. (John 4:24)
Therefore: WE, mankind (both male and female) are created in the likeness of SPIRIT.

My take on this comes down to a very simple summary: Take care of what has been given to us (stewardship), and don’t put yourself above anyone else, and treat ALL with compassion and Love. 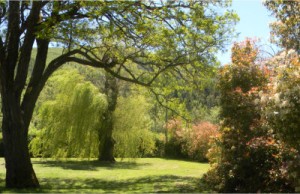 My Wild and Beautiful Sebastian. I love my Willow Tree. I love my Locust Tree, too, which houses our wild Bees. <3

Poverty comes in many forms.
There is absolute poverty, which means that the basic needs of food, shelter and comfort are severely limited. People of absolute poverty do not always know where or when their next meal is coming from.
There is relative poverty, where the household income is below a certain level.
There is situational and temporary poverty, caused by a natural disaster or a life-event.
There are other definitions but those are the basics, except one … the worst poverty of all.
The poverty of ethics and compassion. This comes in varying degrees, and sometimes ‘selective’ degrees.
Coming into Fred Meyers the other morning, rain pouring, I saw a man sitting huddled under a small umbrella, a sign asking for help.
I live in the ‘relative poverty’ zone. Even more so in the last couple months. I am careful with every bit of money spent. I have to be. And it was with great care that I parted with $5 to a man who had far less.
A cafeteria worker in a school quit her job rather than participate in the School Lunch Shaming practices that her employers had implemented.
There are Muslims who cross the boundaries of their religion to help Christians. And there are true Christians who cross those man-made lines to help Muslims.
There are people, who struggle to pay bills who are more than willing to pay taxes that help the greater good, whether it benefits them or not.
At a City Council meeting last night, an amazing group of people came to petition the City to allow them to re-open the Library. One gruff man spoke quite eloquently about how the closure devastated some lower income families.
Part of my property tax goes to the schools, and I don’t have children. I am more than pleased to participate.
I hear so many claiming to be Christian, yet actions and choices taken go so completely against the compassionate and wise words of The Prince of Peace.
There jobs that demand acts of cruelty, and people will commit those acts rather than seek alternative employment.
Lines get blurred, and self-lies are told in order to justify the decisions not to ‘do the right thing’. Fear of losing what little we may have, or in stronger cases, greed, prevails.
Studies show that those who have less are more willing to share. That seems insane to me, until the psychology of the brain is factored in. (Honestly, even then it seems a little insane!).
Humanity is terribly divided on so many levels. Media hammers fear into us. Gossip enforces that fear. Greed and a hunger for control and power incites that fear.
What would happen …. if we could just suddenly say … “It’s over. No more fear. I will believe in Love. I will trust in Love. I will be the Light that I seek. I will not compromise my core beliefs to accommodate anyone.”
What if … we all just said …
I.
Am.
Love.
<3 <3 <3

Wasps are NOT the enemy. Like any creature, they seek shelter and food. They are curious, and they will fight back when they perceive they are threatened. Just because they can more than adequately defend themselves, people hate them. Just as Spiders and Snakes are hated.

Fear. It is all about fear. And that the creatures are so … different … than we are. And then there is the conditioning. And yes, some people are deathly allergic.

But it is OUR behavior that provokes the attacks.

I first learned that Wasps could be save to be around when I witnessed my husband rescuing them from the pool (when we lived in California). They would sit on his finger and he was very calm about it.

Our property is a No-Kill zone (exceptions being mosquitoes, ticks, and a certain beetle that devours crops). This means living with all variety of Wasps (including the ground Wasp). We also have a Bee Colony that lives in a tree base.

The Wasps are very responsive to intentions. And they DO listen when you speak to them (I think it is the vibration of sound).

They are allowed in most areas except the porch overhang. To discourage their interest in such prime real estate, a little vinegar and water spayed along the beams works well.

The other day while driving into town, I realized I had an unwitting passenger. She was crawling on the driver side window. It took some time to find a place to pull over, and I talked to her the entire time. She was calm and I was calm. I lowered the window in small increments so not to startle her. When it was half way down, I gave her a chance to discover the way to freedom. The whole thing took about five minutes, and she peacefully went on her way.

When we are afraid, our bodies put out a chemical. Animals know our state of being by our scent. Just as they know when we are offering and feeling unconditional Love.

People bemoan how Nature is being decimated. But there seems to only be care about the cute or attractive or cuddly parts of nature, or the parts that benefit us (Bees!). What people don’t realize is that Wasps are very much a vital part of Nature.

“Believe it or not wasps do have their uses, and to lose them would be a tragedy in the food chain. Wasps help to control a host of insect pests in their hunt for food to nourish their hungry grubs back at the nest. If it wasn’t for wasps we would be over-run with other less appealing insects that would otherwise destroy crops etc.

Hornets are another victim of bad press. Looking much like a huge ( up to 2 inch) wasp, they are victimised by people even more so, yet are not aggressive unless provoked, in which case they can both sting and bite.

Another common, (and sad) misconception, is the misidentification of hoverflies for wasps. These harmless insects look like a much smaller version of a wasp, but have developed the black and yellow stripes as a form of protection to deter predators. Hoverflies have no sting, do not ‘buzz’ like a wasp or hornet, and are actually very good for the garden in terms of pollinating plants. There are over 270 varieties of hoverflies in Britain, many of which are migrants from the continent. It is incredible that a creature so small can travel so far, and a tragedy if they are killed by humans who are fooled by their colours, and ignorant of their true nature.”

~~~ It is important to examine prejudices and our own behavior, and take responsibility for our own actions.

The Earth is a living entity, and it is WE, the People who are causing her damage.

BE Love … or BEE Love 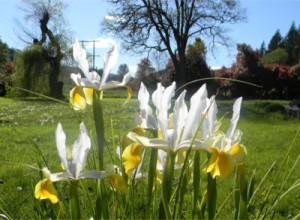 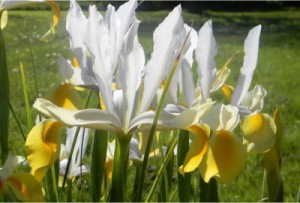 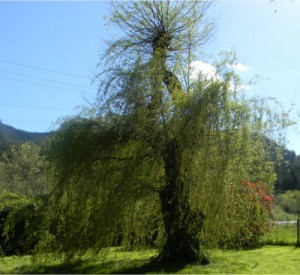 Our resident Bee colony has produced another Queen and this afternoon she has led her new colony out of the main hive. They are contemplating their journey while resting in our Apple Tree. They are gentle bees and don’t seem to mind when we are close. It is quite fascinating to watch and to hear them. Hopefully, they will find a new and SAFE home <3 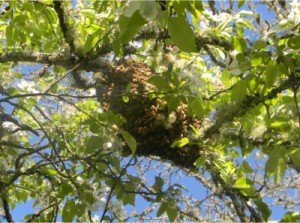 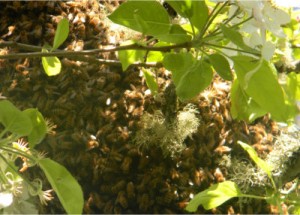